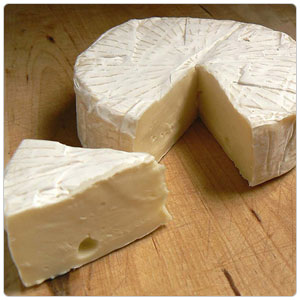 A soft, creamy cow's milk cheese named after Brie, the French region from which it originated. It has a distinctive rich, creamy flavor which is deliciously mild. It is pale in color with a slight grayish tinge under a rind of edible white mold; very soft and savory. Brie is usually served at room temperature or even slightly warmed.

A cow's milk cheese from France which is well known around the world. Sometimes called the "Queen of Cheeses," Brie is a delicious dessert cheese, and complements fruit, high quality bread, cheese plates, appetizers, sandwiches, and anything else the cheese can be smeared onto.

Although Brie is traditionally a French cheese, it is made all over the world, with the highest quality Brie coming from France. The cheese has been manufactured in one form or another since the eighth century, and was popular with French royalty before becoming beloved by the people as well. The creamy center, and edible, though tasteless, rind have oozed their way into the hearts of cheese lovers everywhere, making Brie one of the most recognized types of cheese in the world.