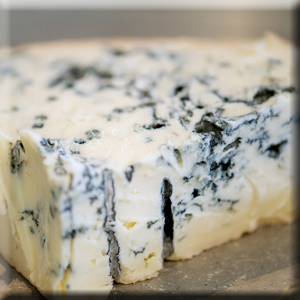 Gorgonzola is a member of the blue cheese family of cheeses, but with a more pungent flavor and scent. It is an uncooked cheese that has a white appearance with blue-green veins throughout. In the past, Gorgonzola could take one year to produce because of the long aging process. Today, the cheese is exposed to more oxygen, which shortens the process to three to six months.

Gorgonzola cheese can be of a young or an old variety.

Available in an 8# wheel.

Gorgonzola that has not been aged long is called Dolce and is creamier and milder than the aged version. It is good for sauces and spreads. Piccante Gorgonzola is the aged variety. It is sharper and more crumbly which make them good additions to the tops of prepared dishes or for eating by themselves. In fact, Gorgonzola is most frequently served as a dessert cheese at the end of a meal.

Gorgonzola can be used in several ways. It is often served alongside fruit and paired with wine at the end of a meal. It can be served on a salads and cheese plates, Gorgonzola sauces can be created for topping vegetables and short pastas such as ziti or macaroni, Gorgonzola can also be put on pizzas, melted into a risotto or served with polenta. Because it is a typically Italian cheese, its use is generally reserved for Italian cooking.

Gorgonzola cheese has its roots in Italy and is named after a village that is now part of Milan's suburban area. The cheese itself was first produced in the ninth century, although its full blue green-gray color was not fully developed until the 11th century. Gorgonzola was originally aged in caves, where the blue veins in the cheese developed from spores.

At one time, Gorgonzola was called "Stracchino" cheese and was used to cure stomach conditions during the Middle Ages. It was also believed to prolong life.