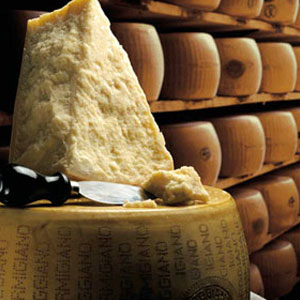 True Parmigiano-Reggiano cheese has a sharp, complex fruity/nutty taste with a strong savory flavor and a slightly gritty texture.

Traditionally, cows have to be fed only on grass or hay, producing grass fed milk. Only natural whey culture is allowed as a starter, together with calf rennet.

The only additive allowed is salt, which the cheese absorbs while being submerged for 20 days in brine tanks saturated to near total salinity with Mediterranean sea salt. The product is aged an average of two years.

Available in a 9# wedge.

Use as part of a cheese plate, grate over pasta and risotto, use in salads, sauces, and soups.

According to legend, Parmigiano-Reggiano was created in the course of the Middle Ages in Bibbiano, in the province of Reggio Emilia. Its production soon spread to the Parma and Modena areas. Historical documents show that in the 13th-14th century Parmigiano was already very similar to that produced today which suggests that its origins can be traced to far earlier.

It was praised as early as 1348 in the writings of Boccaccio; in the Decameron, he invents 'a mountain, all of grated Parmesan cheese', on which 'dwell folk that do nought else but make macaroni and ravioli, and boil them in capon's broth, and then throw them down to be scrambled for; and hard by flows a rivulet of Vernaccia, the best that ever was drunk, and never a drop of water therein. During the Great Fire of London of 1666, Samuel Pepys buried his 'Parmazan cheese, as well as [his] wine and some other things' in order to preserve them. In the memoirs of Giacomo Casanova, he remarked that the name "Parmesan" was a misnomer in his time (mid-18th century) as the cheese was produced in the town of Lodi, not Parma. This comment originates probably from the fact that a grana cheese very similar to the "Parmigiano", the Grana Padano, is produced in the Lodi area.