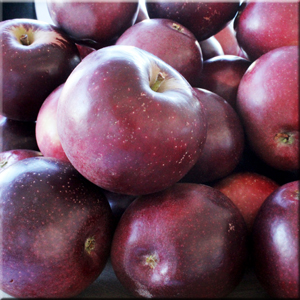 Deep red apple with somewhat waxy skin, dense golden flesh and a  intense aromatic, sweet/tart flavor that is best for cooking and cider. Its texture is very crisp but softens with storage.

Best for cooking, juicing, making into cider or sauce. Also great for drying. Also best when stored for a month or so after harvest as it will soften up.