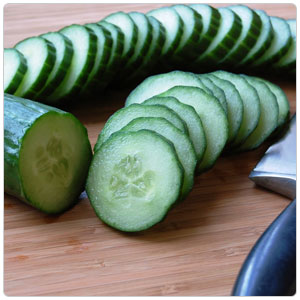 English cucumbers are 8-10 inches long with smooth, dark green skins, a crisp, crunchy texture and a mild, refreshing flavor. They are sweeter, have thinner skin than other varieties and are nearly seedless. Unlike other slicing cucumbers, English cucumbers are not coated in wax to preserve shelf life, but instead are wrapped in plastic.

Cucumbers are most often used raw in salads, sandwiches and sushi rolls. Thick skinned cucumbers may need to be peeled. There is no need to remove the seeds unless they are hard and overdeveloped. Avoid dressing cucumbers in advance as they will give off too much water and dilute the flavor of the dish.