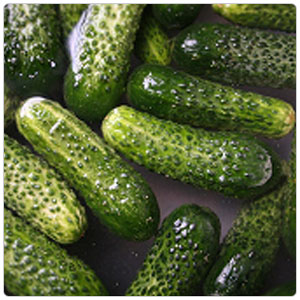 Pickling cucumbers typically have thinner skins than the salad type, allowing for the vinegar, brine or other pickling solution to better penetrate the skin and flavor the meat. They are short and squat, instead of long and lean. Pickling cucumbers also usually have "warts," the little bumps on the skin that are the trademark of the classic dill pickle; salad cucumbers usually have much smoother skins. Good pickling varieties will also have fewer seeds as well, unless they have been left too long to ripen.

All varieties of cucumbers can theoretically be used as salad cucumbers, also known as slicing cucumbers, or as pickling cucumbers. However, some varieties are much better suited for one type of preparation than the other.

Cucumbers originated in India, where they have been cultivated for more than 3,000 years. Wild ancestors of the fruit, however, were part of the human diet long before that. Excavations on the Burma-Thailand border found cucumber seeds among the remains of meals eaten around 9750 b.c.e. Pickling was invented early, too, possibly because the ancients discovered that soaking cucumbers in brine took the bitter edge off the flavor of the fruit. At the time of the pharaohs, Egyptians ate brine-dipped cucumbers at every meal. Those early cucumbers were probably more closely related to the West Indian gherkin than to the juicier, sweeter cucumber that modern gardeners plant.