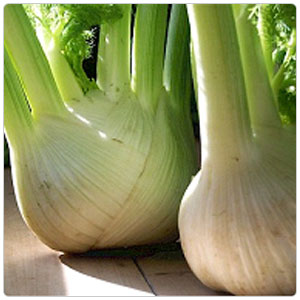 Fennel is crunchy and slightly sweet, with an anise-like flavor. It is composed of a white or pale green bulb from which closely superimposed stalks are arranged. The stalks are topped with feathery green leaves near which flowers grow and produce fennel seeds. The bulb, stalk, leaves and seeds are all edible. Fennel belongs to the Umbellifereae family and is therefore closely related to parsley, carrots, dill and coriander.

Use fennel raw, thinly sliced, in salads. Caramelize, roast, braise or blanch and use as a vegetable component or an ingredient in pizza, pasta, & risotto. Fennel's subtle flavor works just fine on its own, but does wonders when combined with other foods. Tuna tastes more tuna-like when cooked with fennel. A simple salad of oranges, red onion and lemon vinaigrette has more zing with the addition of crunchy, raw fennel. Grilled sea bass becomes emblematic of Mediterranean cuisine when stuffed with lemon slices and fennel fronds.

Fennel is native to southern Europe and the Mediterranean region, where it has been used for centuries as a spice and for medicinal purposes