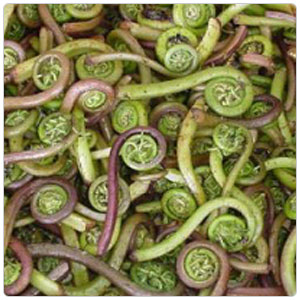 Fiddleheads are unique in both appearance and flavor. The young shoots of the fern are tightly wound into a circular button-like shape. The texture is crunchy and succulent with a slightly gelatinous flesh. The flavor is often compared to asparagus and green beans with rich notes of artichoke and pine nuts.

Fiddleheads must be cooked before consuming. Raw fiddleheads are mildly toxic and can cause nausea, headaches, and dizziness when eaten in large amounts. A few raw fiddleheads won't hurt you....too much. Common cooking methods include steaming and blanching followed by sautéing in oil or butter to finish. However, they will retain their crunchiness, and achieve new flavors that cannot be reached when blanching, if sautéed from a raw state. Favorable fiddlehead food parings include cured meats such as prosciutto and pancetta, melting cheeses and hard grating cheese, shrimp, white fish, black olives and potatoes.

When people say "fiddlehead fern" they are most often talking about the ostrich fern. This is the species often available in produce markets and sometimes even on the menus of fine restaurants. These magnificent ferns grow mostly in shady river bottoms, where often they cover many acres of ground, but they are also occasionally found in rich hardwood forests. Ostrich fern ranges from Newfoundland to Alaska and British Colombia, south to northern California, the Midwest, and the Southern Appalachians. It is abundant in the upper Great Lakes, the Northeast, and much of southern Canada.