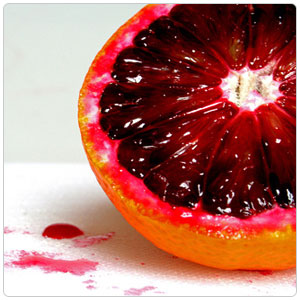 Blood oranges are characterized with an interesting and complex flavor when compared to other oranges. The juice is tart and rich with a hint of raspberry and less acidic than regular oranges. Early season Blood oranges have orange flesh with reddish veins and, as the season progress, the flavor intensifies as the flesh eventually turns to a vivid crimson, pomegranate color. This distinctive dark flesh color is due to the presence of anthocyanin, a natural pigment common to red flowers, but uncommon in most citrus fruits. The degree of coloration in both flesh and skin depends on light, temperature and variety. Moro and Tarocco are the two varieties most common to our market and the Moro variety is more popular as the season is longer and the distinctive color more prevalent.

Use the juice in dressings, marinades and cocktails.

Flesh can be used in salads, syrups, jams and marmalades.

There is some historical evidence that the blood orange hybrid first appeared in Southern Europe around 1850 and was then brought to North America many decades later by Spanish and Italian immigrants. Commonly known throughout most of the world as "blood," "blood-red" or "blush" oranges, they have a number of other common or regional names. In the United States, they are known as Rubies, Blush or Moro oranges.