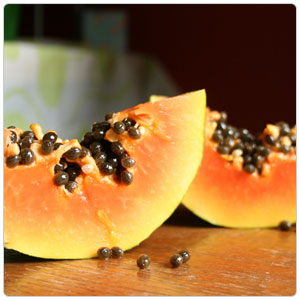 The Hawaiian papaya is pear shaped, weighs about a pound and has yellow skin when ripe. The Mexican papaya is a large oval shaped fruit with green skin and weighing up to ten pounds. Both varieties have silky smooth flesh with delicate sweet flavor and a center full of edible black seeds.

Papayas are usually eaten raw and combine well with other tropical fruits as well as yogurt,lime, chilis, dried shrimp, rice wine, ginger and scallions. Under ripe papayas are often shredded and used in salads.

This revered tropical fruit was reputably called "the fruit of the angels" by Christopher Columbus. In the 20th century, papayas were brought to the United States and have been cultivated in Hawaii, the major U.S. producer since the 1920s. Today, the largest commercial producers of papayas include the United States, Mexico and Puerto Rico.