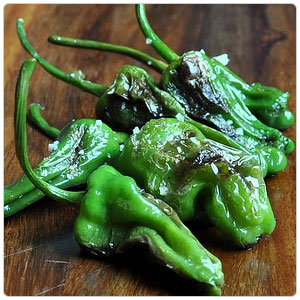 A suddenly popular pepper, native to the ancient Spanish town of Padron. Padron is a small, crinkled, green pepper with grooved furrows along their skin. Most Padron peppers are sweet and mild, however, one in ten will be hot and spicy.

Padron peppers are traditionally pan-fried, blistered, then served with quality olive oil and sea salt and served as a snack or tapa. Padrons can be a lively addition to pizzas, salads, pasta, soups, fritattas and rice dishes such as paella.

Though the Padron Chile pepper has become the agricultural pinnacle of success of Padron in Galicia, Spain, its historic origins can be traced back to 17th Century South America. The Padron was brought from the New World to Spain in the 18th Century, when Franciscans first attempted cultivating the pepper seeds at their monestary in Herbon, near Padron. The first introduction of the Padron within the United States was by pepper farmer, David Winsberg of Happy Quail Farms in Coastal Northern California in 1998. Now, California has an abundance of small farms along the coast producing Padrons, making the pepper more consumer friendly on the pocket book as well as giving more people access to the pepper. The Padron, once obscure is now becoming commonplace at summer farmers markets and in the produce section of local grocery markets.