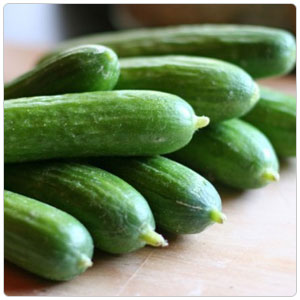 Armenian cucumbers are most commonly eaten raw as part of a composed summer salad but also may be used to make cucumber Raita to be used as a condiment to chicken or lamb. Armenian Cucumbers pair well with salmon, scallops, shrimp and smoked salmon-hot and cold smoked. Cucumbers compliment gin cocktails and other beverages

Cucumbers are believed to have originated in India and have been cultivated about three thousand years. Especially popular in Greek and Arab cuisine, this cucumber may have origins in Persia because of the name; however, there is no evidence to support that theory. Cucumbers have an amazing capacity to retain water and to remain cool. Its interior may be up to twenty degrees cooler than its exterior. A fact that explains the old expression, "cool as a cucumber".