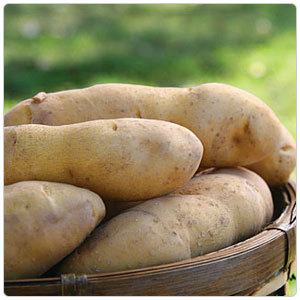 Harvested in spring or early summer, new potatoes are the youthful version of the more familiar adults. Their delicate thin skin requires farmers to gently dig each one from the earth by hand. A simple scrub to remove any excess soil replaces peeling.

Quick cooking is recommended for these tender tubers who lack the maturity to turn sugars into starch, making them a poor choice for baking or frying.

La Ratte potatoes are the darling, potato-of-choice in the "La Puree Pomme de Robuchon" recipe by a modern and famous French chef, Joel Robuchon. The dish can be described as the union of potato and butter in the body of a light but luxuriant sauce. It has inspired as many "wows" from critics as it has professional chefs to re-create the dish in their own restaurants. On its surface the dish is seductively simple yet it is technically challenging to execute perfectly. Despite several published versions of "tell-all" Robuchon recipes both the ingredients and the process remain uncertain and slightly mysterious. In regards to the potatoes most sources and Robuchon himself cite La Ratte fingerlings as "the potato." To gardeners, however, this seems an odd choice given that La Ratte is a waxy spud that is prone to becoming gummy in a puree. But Robuchon acolytes defend his choice of potato claiming it to be his version of a culinary handicap that showcases his superlative technique. His critiques respond by hinting that he may actually use a floury potato, BF15, which is common in France. They claim the La Ratte suggestion is a smoke screen intended to sabotage his competition. You may choose to believe it or not but these kinds of debates fill culinary blogs and keep some people up at night.