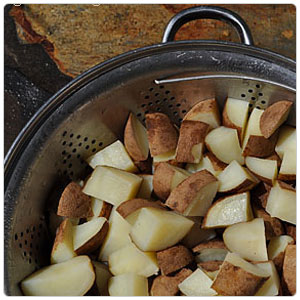 The russet has an elliptical shape with a rough brown skin and numerous eyes. It is a highly versatile, starchy potato whose white flesh is somewhat dry and mealy after cooking.

It is most widely used for baking and frying, both applications bringing out its best culinary virtues. Russet potatoes will keep, in cool, dark storage for up to a month

The Russet (meaning rough) Burbank potato was given its name due to the texture of its skin. Inside the large potato's fine, sandpaper-textured, ruddy-colored skin is a firm, low-sugar, moist and starchy flesh that becomes fluffy and light when cooked. Varieties include Russet Burbank, Russet Arcadia, Russet Norkotah and Butte.