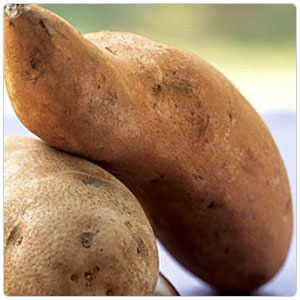 Although available year round, sweet potatoes are in season during the colder months of the year. They can be, baked, steamed, and roasted. Once cooked, they can be mashed, pureed, grilled, roasted or fried. They make excellent gratins and pair well with pork and duck.

While many people lump all potatoes into one category, potatoes can actually be quite different in terms of their taste, flavor, texture, and nutrients. Sweet potatoes are no exception! Sweet potatoes belong to an entirely different food family than the common potato. The moist-fleshed, orange-colored root vegetable that is often thought of as a "yam" in the United States is actually a sweet potato. It was given this name after this variety of sweet potato was introduced into the United States in the mid-20th century in order to distinguish it from the white-fleshed sweet potato to which most people were accustomed. The name "yam" was adopted from "nyami," the African word for the root of the Dioscoreae genus of plants that are considered true yams. While there are attempts to distinguish between the two, such as the mandatory labeling by the U.S. Department of Agriculture that the moist-fleshed, orange-colored sweet potatoes that are labeled as "yams" also be accompanied by the label "sweet potato," when most people hear the term "yam," they think of the orange-colored sweet potato as opposed to the true yam. Orange-fleshed sweet potatoes may be one of nature's unsurpassed sources of beta-carotene and are some of the most nutritious vegetables around.