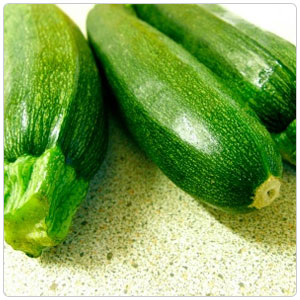 A hybrid of the cucumber and closely related to melons, Zucchini, whose skin can be yellow in color but is much more often found in farmers markets with its dark green skin. (The dark green skin of zucchini may also be naturally striped or speckled.) Zucchini is one of the summer squash types that grow on flowering plants with edible flowers which are often stuffed with a creamy cheese and fried.

Zucchini can be shaved into salads, used as part of a summer vegetable ragout, baked into breads and muffins, fried into fritters, grilled as a vegetable component, added to pastas, pizzas and used in gratins.

Amazingly, scientists have found summer squash seeds preserved in Mexican caves for more than 10,000 years. It was that long ago when domestication of summer squash originated in Mexico and Central America. Cultivation of summer squashes quickly became popular in North, Central, and South America, and Native Americans often referred to squashes as one of the "three sisters" alongside of corn (maize) and beans. Squashes were one of the North American foods that Columbus brought back to Spain from North America, and Portuguese and Spanish explorers introduced squashes to many parts of the world.