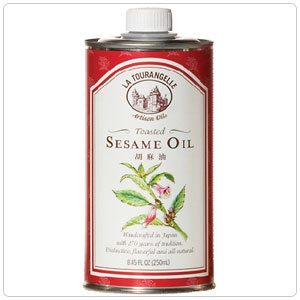 La Tourangelle has partnered with one of the oldest Japanese oil mills to bring you this toasted sesame oil, crafted in central Japan strictly following 270-year-old traditional methods. Sold by the liter.

Sesame Oil has long been the universal cooking medium in Asia, imparting the characteristic flavor to the foods of its regions. In Chinese and Korean cuisine it is added as a flavor highlight to cooked dishes. The Japanese often add about 10% toasted Sesame Oil to the oil used for tempura or deep-frying, creating a rich, background flavor. American cooks may want to use Sesame Oil to flavor an Asian stir-fry or noodle dish or as a marinade for meat or fish. Sesame Oil makes a delicious dressing for a Chinese Chicken Salad. Sesame Oil, rice vinegar, fresh grated ginger, and mustard is a delicious dressing for any combination of salad greens.

Their mill slowly roasts the sesame seeds using lower temperatures. The result is a lighter colored, more richly flavored oil with a subtle, toasted taste. The production of Sesame Oil begins with sesame seeds harvested from South America or Africa. The seeds are toasted and then expeller (machine) pressed to extract the oil. This oil is filtered several times and then bottled. The quality of Sesame Oil varies depending on the quality of the seeds, and the length and temperature of the toasting process. While nearly all the Sesame Oil now available in the U.S. and in Europe is produced in China or Taiwan using methods that involved certain production shortcuts, La Tourangelle's Japanese partner uses only the freshest, highest quality seeds that are painstakingly cleaned and slow toasted. Japanese craftsmanship in the production of sesame oil is recognized as superior throughout Asia.